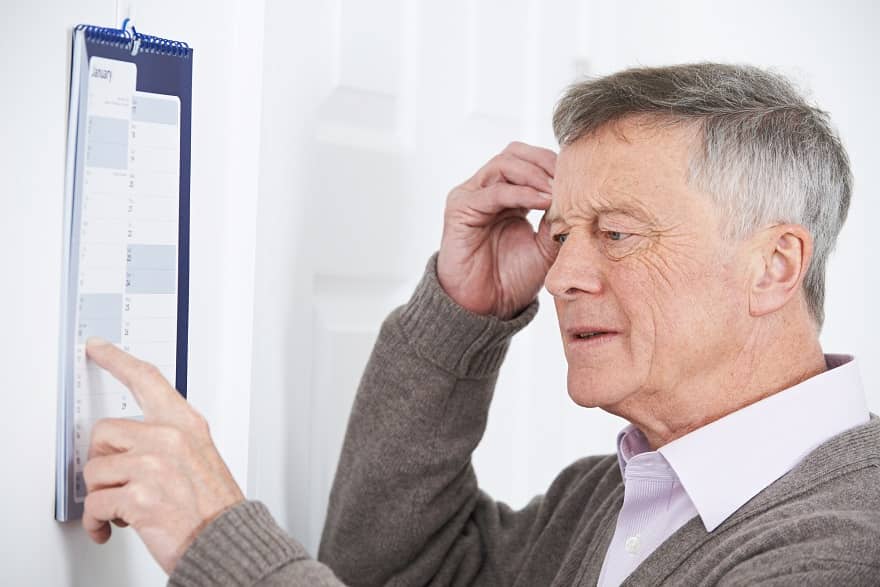 Are you aware of the early symptoms of dementia?

Dementia is one of the most common neurodegenerative diseases and is a major public health concern worldwide.

While women are more likely to get the condition, men get it too. Men are just less likely to get dementia early on in their lifecycles.

What are the early signs of dementia in men so you can keep a lookout? Let’s explore.

One of the early signs of dementia in men is difficulty with memory, especially short-term memory. This can manifest itself in forgetting recently learned information, forgetting to pay bills or following through on commitments, or increasingly relying on memory aids such as reminder notes.

If memory difficulties are affecting your daily life and causing you concern, it’s best to see your doctor to rule out any reversible causes and to begin planning for future dementia care and memory care needs.

This can lead to problems with driving or walking, as men may have difficulty gauging the distance between themselves and other objects. Another early sign is changes in color vision. This can make it hard to distinguish between colors, and may also lead to difficulty reading.

In addition, men may also experience difficulty recognizing faces or objects. This can make it hard to communicate with loved ones or participate in activities.

There are a few early signs of dementia in men that may be related to difficulty with executive functioning. For example, men may have trouble remembering to pay bills or keep track of important dates. They may also neglect their appearance or have difficulty driving.

These difficulties can cause problems at work, at home, and in social situations. If you notice any of these changes in yourself or a loved one, it is important to talk to a doctor. Early diagnosis and dementia treatment can improve the quality of life and slow the progression of the disease.

One of the early signs of dementia in men is difficulty with language. They may have trouble finding the right words or understanding what others are saying. This can be a sign that dementia is starting to affect their ability to communicate.

Changes in Mood or Behavior

These changes can be subtle and may not be noticed by family and friends. However, they can be indicative of the beginning stages of dementia. If a man begins to exhibit these changes, it is important to see a doctor for an evaluation.

One of the most common early signs is changes in sleep patterns, such as waking up frequently during the night. Other early signs include forgetfulness, mood swings, and difficulty concentrating. If you notice any of these changes in your loved one, it’s important to seek professional help as soon as possible.

Here Are the Early Signs of Dementia in Men

If you are worried about dementia, look for these early signs of dementia in men: problems with vision, slowing down of movement, changes in mood or personality, and problems with memory, especially forgetting recent events. If you experience any of these, talk to your doctor.

If you enjoyed this article, make sure that you explore our website to find more articles just like this one!

7 Reasons to Add a Sunroom to Your Home

Taking Care Of Yourself With Diabetes Self-Management Magazine

Should You Get a Breast Reduction and What Are the Benefits?

What Is the Best Pest Control Method to Get Rid of Pests...

How to Choose the Best Pillow for a...

Mouthguard Tips for Those Who Wear Braces