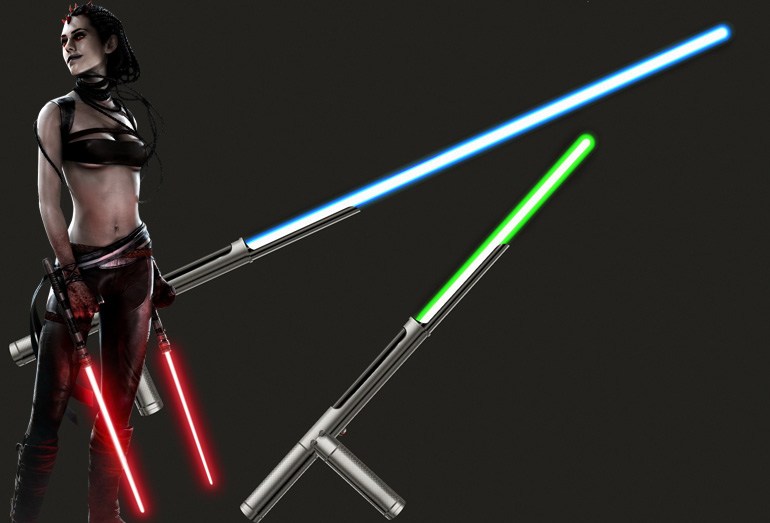 What makes unique lightsabers? Is it the design of the device or the person who wields it? While this question could be up for debate by many, there is one undeniable fact that we cannot ignore: we fell in love with lightsabers because of the characters that wield them. Whether they were Jedi or Sith, the lightsaber was just a personification of the character who wielded the weapon. We put together an interesting list of lightsabers that are uniquely based upon the wielder who held them. These characters can be found anywhere, whether they’re in the Star Wars movies or extended universe via books, video games, comics, etc. Luke’s traditional lightsaber came with a blue hint that showed aspects of the character within the weapon itself. Blue lightsabers were designed for Jedi Knights. These knights took a more proactive role in the order by defending those who could not defend themselves. This is a perfect representation of Luke Skywalker as a character, especially as he began to grow throughout the original trilogy. There were even hints of this protective trait in The Last Jedi as we saw an older version of Luke Skywalker who isolated himself from society.

Some say that the sith’s lightsabers were modeled after the dark lords’ thirst for blood and power. This couldn’t be further from the truth when you put Darth Vader under a microscope. His red tinted lightsaber was intimidating to all who would cross its path. Most of the time, it would be the last thing that they ever saw as the Dark Lord would cut his way effortlessly through resistance members. It is a tragic story that viewers would come to understand as we watched Anakin Skywalker’s fall from grace towards the dark side. However, there was still light underneath all that anger and hatred that would eventually save the day in the end.

If there ever was an indication of rage, the hilted lightsaber that Kylo Ren wielded truly represented the character. The hilts placed on his lightsaber would allow him to aggressively engage his opponents by add giving him a better tactical advantage when it came to saber fighting. His rage was unmatched, even to his grandfather Darth Vader. His weapon truly represented unadulterated rage in its design, making it a unique lightsaber by the likes that we have never seen before.

Five Ways to Get Your Guests in the Holiday Spirit

Search Engine Optimization – Everything You Need To Know

Pool Types: What Is an Infinity Pool?

7 Benefits of Keeping a Gratitude Journal +...