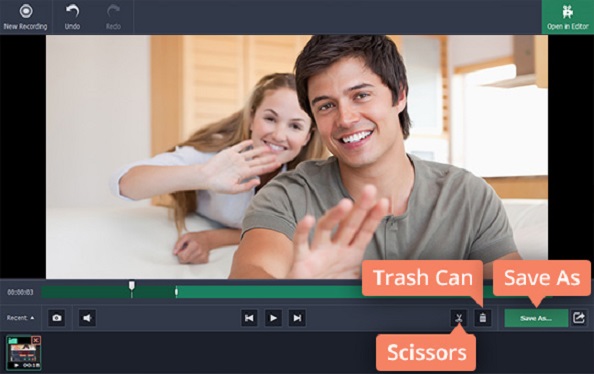 Conventional expert interviews can be challenging to record, and the preparation required to set up a face to face interview is fairly involved. Recording the interview via a video call is definitely easier by comparison, but you still need to know how to go about it.

Setting Up the Screen Recording

As you are aware, you’ll need to use screen recording to capture the video footage of the call and save it. Typically any screen recorder will let you record Skype calls or calls on any other platform, but for example you could try Movavi Screen Recorder.

Insofar as the setup goes, there are a few areas to consider:

To record both ends of the interview, you need to capture the system audio as well as audio from the microphone. Some screen recorders will let you save the audio separately, which may make editing easier later on.

While less involved than a face to face interview, some basic preparations will be needed to the setting that you’re recording the interview. Ideally both the interviewer and interviewee will want to:

If you’re interviewing an expert who has been interviewed via video calls in the past, it is likely that they’ll know all this – so all you need to worry about is the preparation on your end.

As you can see despite the fact that recording interviews via video calls is easier, some preparation is still required. By taking the necessary steps however you should end up with an expert interview that looks a lot more impressive and its quality should be miles better than it would be otherwise.

Is an EIN Number the Same as a Tax ID Number?

After you open company in hong kong, you could call for a replacement of share accreditations some days

How Do I Choose the Best SEO Company in My Local Area?

Why Bluetooth Mouse Are Becoming Hype In The Technology World?

Find out how Adderall can play a role in your health

4 Steps You Can Take to Improve Your...

How Has Dash Affected the Online Gambling Industry?