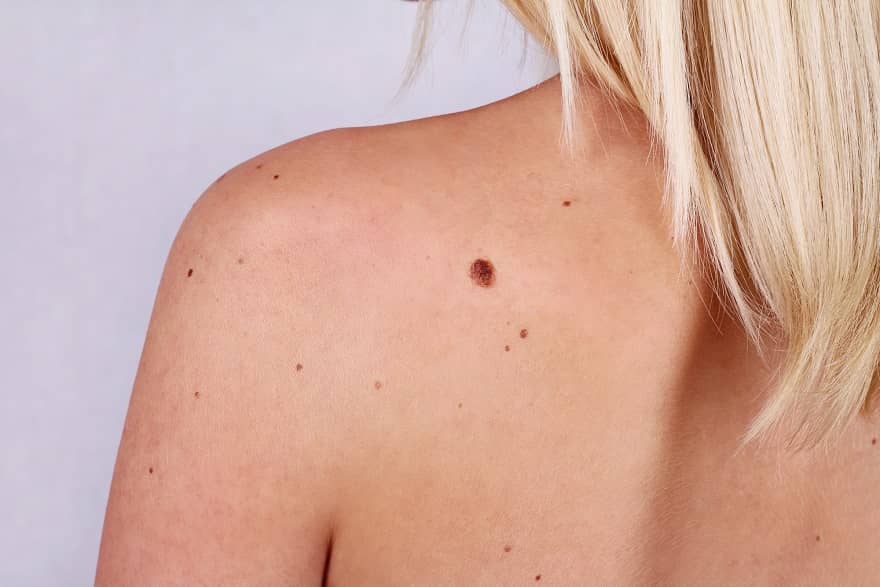 Perfectly placed moles are often referred to as “beauty marks.” The phrase conjures images of iconic celebrities like Marilyn Monroe and Cindy Crawford. However, many people with moles view them as blemishes. Over $77 billion is spent each year on concealer and foundation products to cover such blemishes.

If you have moles that you’d like to remove, there’s a lot that you’ll need to know. Certain cases will require mole removal as a medical procedure. Other times, you can remove moles naturally at home.

Here, we’ll review what exactly a mole is and go over the different types of moles. Plus, we’ll give you tips on removing non-cancerous moles on your own and when to see a doctor instead.

What Is a Mole?

A mole appears as a dark spot or bump on your skin. Made of small clusters of heavily pigmented skin cells, most moles are harmless.

Almost everyone has a few moles. While it’s possible to be born with a mole, most form later. New moles can continue to appear throughout your life. It’s normal to have 10-40 moles on your body.

When they are flat, they are commonly called freckles. It’s important to understand that freckles are actually moles so that you can watch for any changes in these as well.

There are 4 general types of moles. You may only experience one, but it’s possible to sometimes have all four.

Atypical moles are larger than the end of a pencil and usually have an irregular shape. Often, these moles are a mix of dark brown, light brown, red, and pink colors. Atypical moles can indicate melanoma which is a type of skin cancer.

When a baby is born with a mole, it’s called a congenital mole. Only about 1% of people are born with this. While they can exist without causing any problems, observe your moles regularly. Watch for any changes.

Spitz nevus moles share many characteristics with atypical moles. They can be multi-colored and have irregular edges. These sometimes have a tiny hole that oozes or bleeds occasionally.

Any mole that forms after you are born and doesn’t fall into the categories above is considered a common mole. These are also referred to as acquired moles.

Are All Moles Harmful?

Atypical moles can be an early sign of skin cancer. Congenital moles are harmless in the beginning but if they start to grow or change shape or color, it increases your risk for melanoma.

While spitz nevus and common moles are generally fine, they may be a nuisance if they’re not in a good location. For example, a mole in a bad spot might catch on your clothes or your hair brush often enough that you’d like to remove it. Sometimes a mole forms in strange locations like the tip of your nose. It makes sense that you may want to remove that as well.

When to See a Doctor

Doctors advise using this ABCDE checklist to help determine when to see a dermatologist for your moles.

Check your facial moles and the rest of your body regularly. Look for anything irregular or evolving and check with a dermatologist if you have any concerns.

There are medical techniques used to remove moles from a face or other areas as in-office procedures. The mole treatment method used will depend on factors such as where the moles are located on your body and whether they are potentially cancerous or non-cancerous moles.

Your dermatologist may decide to freeze, burn, shave, or cut off the mole. If your doctor determines this is necessary, medical insurance should cover it. Some of these procedures are mildly painful and may or may not leave scars.

How to Remove Moles Naturally

There are valid reasons why you may want to remove benign moles. Facial moles in weird places may be eroding your self-confidence. A mole in an inconvenient location might be problematic because it gets injured when it catches on fingernails or clothing.

Effective mole treatment at home will take time and patience combined with an understanding of the process.

First, moles are made of skin cells. They will grow back to replace themselves. This is why it’s important to apply your remedy several times each day and not miss any applications until it’s completely gone.

Second, the process of removing dark-pigmented skin cells entirely while still allowing the regular cells to take over the space will take time. Most safe, natural remedies will take at least three weeks. Before you begin, be sure that you can commit to this.

Third, you need to understand which ingredients will actually work and which ones won’t. Ideally, you’ll want to find a mixture that includes marigold, dragon berry, and white cedar. Here are the scientific names to look for:

These ingredients are found in eastern and holistic medicines for multiple uses. When combined with soothing oils, the result is an effective way to remove moles naturally over time. The added oils are especially important when you’re looking to remove facial moles where your skin is more delicate and visible.

Some commercial products are available that use this effective combination of ingredients. When shopping for mole removal products, read the active and inactive ingredient lists to be sure you’re getting a tincture that will work. It’s a good idea to read through the recent reviews from other buyers, too.

Many unfounded home remedy suggestions come from outdated information from times when medical information was not widely available. Be aware that many at-home remedies are not very helpful. Here are some of the ideas that you should not waste your time with.

Things like garlic or banana peels are often touted as simple ways to get rid of unwanted moles because their enzymes and acids can destroy cells. The suggestion is to apply a small piece to the area and hold it in place with tape or bandages. However, the real effect of applying enzymes directly to your skin for prolonged periods is that you could end up with painful burns that require medical attention.

Apple cider vinegar, tea tree oil, and iodine are often recommended as natural ways to remove moles or warts. These can also burn or damage the surrounding skin and leave scars. You should not apply caustic substances to your moles, even if they are natural.

Mixing a paste of castor oil and baking soda shows up frequently in searches. The theory is that the baking soda will dry out the mole and kill the cells so that they flake away easily and the castor oil creates a moisturizer that helps the skin heal. In reality, this usually causes inflammation and discomfort and when you’re unable to continue, the mole grows back.

Lemon juice is said to fade the color of your moles when applied regularly. You’d still be left with a mole, though. Plus, lemon juice is highly acidic so it may not be a wise idea to try this on your skin.

Other suggestions like oregano oil, turmeric, raw potato, honey, coconut oil, or essential oils are common. These ideas are unlikely to cause any harm to your skin but there are also no studies that show these are helpful for mole removal.

Remember that moles are a collection of skin cells that regenerate faster than you realize.

These cells can form into dark-pigmented clusters that become harmless moles, but they can also become malignant. The more moles you have, the higher your risk is. Assess your moles following the ABCDEs and see a dermatologist when needed.

Some moles, like facial moles, can be bothersome so it’s common to want to have them removed. Doctors may avoid this if your moles are non-cancerous, though. Because of the delicate nature of skin cells, it’s important to be cautious with your choice of home remedies for mole removal.

Home remedies rooted in outdated ideas about medicine are unlikely to work and they may even cause damage. When you’re looking for a way to remove moles naturally, be sure that you understand what works for mole removal. Your best options are going to be professional products with the right ingredients and strong reviews from real users.

Looking for more tips on skincare and self-care at home? Get your questions answered in our other blog posts!

Car Exhaust Shops Near Me: How To Clean Exhaust Tips

The Complete Guide to Picking Dog Trainers: Everything to Know

Dermal Fillers vs. Botox: Which One Is Right for You?

How to Prepare for Laser Hair Removal

Skin Care on TikTok: Why You Shouldn’t Trust Them

Do You Have to File Taxes on Disability Income?

How to get a General Contractor License in...

5 Accessories for Gaming You Need for Your...