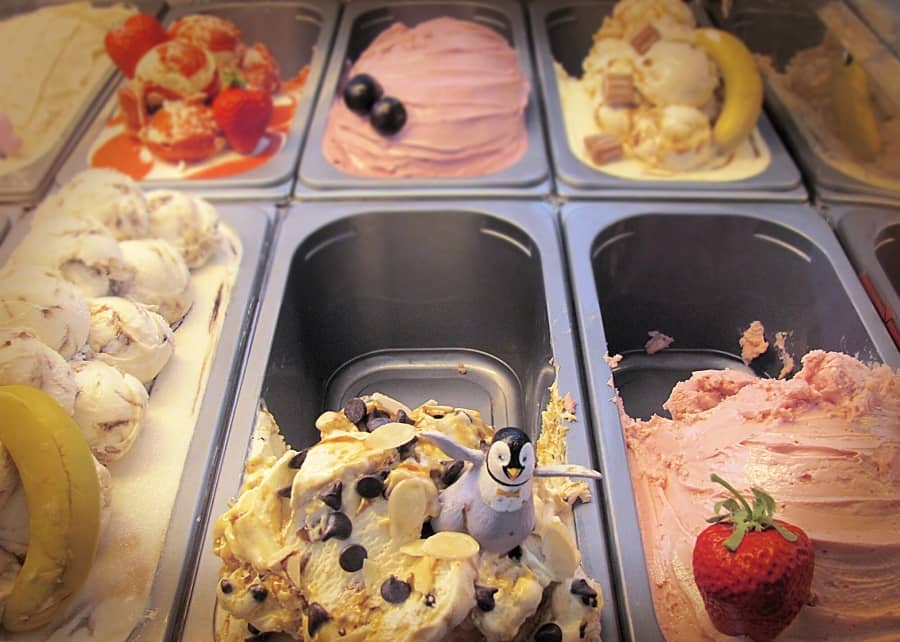 While ice cream is a long-established favorite across the globe, the trend towards this alternative treat is rapidly radiating from its Italian birthplace, with over 100,000 gelato shops opening worldwide in 2021.

As such, there’s a chance you’ll face a choice between gelato vs ice cream soon. Keep reading to discover the difference.

What Is Gelato Made From?

The basic ingredients for gelato comprise milk, cream, and a few egg yolks (if any), depending on the desired flavor, and some types of gelato also have a little water included in the ingredients list.

In southern Italy, they make gelato using cornstarch to thicken it.

Then, manufacturers add fresh fruit and nut purées as well as various sugars, depending on the gelato recipe. This means most gelato ends up with a butterfat content of around 9%.

How Do You Make Gelato?

Gelato makers place the gelato in a discontinuous batch freezer at 10 °F before setting it out for their customers. They serve the gelato with a spade-shaped spoon, so they can soften and shape it while they dish it up.

During the process, gelato makers churn the mixture at slow speeds that introduce only a little air into the gelato, producing a dense consistency with around 25 to 30% air.

It’s easier to make homemade gelato than it is to whip up a batch of ice cream. You start by creating a custard of the milk, sugar, and cream and then stir it slowly until it cools.

You can use an ice cream maker to streamline the process if it has a slow-churning option for blending the mixture. Once the mixture thickens, you can store it at the appropriate temperate to freeze it slightly before enjoying it.

How Do You Make Ice Cream?

An American ice cream recipe, like the high-end types used for ice cream catering trucks, generally comprises equal parts of whole milk and heavy cream, with plenty of egg yolks. These artisan ice creams have plenty of rich butterfat, usually around 14 to 25%.

In the U.S., ice cream must have at least 10% butterfat, anything else is technically sorbet.

Mass-produced varieties of ice cream may contain preservatives and powdered milk to ensure a longer shelf life and a cheaper price.

Soft serve is about as far as you can get from traditional ice cream, but it’s still pretty tasty.

Manufacturers churn ice cream much faster than gelato, so it contains more air. Some types of ice cream contain as much as 50% air.

You use a scoop to serve ice cream, which makes it easy to shape it into balls of deliciousness that balance readily on a sugar cone.

Homemade ice cream involves dissolving sugar into the milk and cream and then transferring the mix into a container and freezing it. Next, an ice cream maker takes over to churn the mixture at a low temperature until it becomes thick and creamy.

This is a tricky, time-consuming, and expensive process.

Eating ice cream is a sensory experience, which is what makes it so appealing.

The fat content in gelato and ice cream coats the tongue, and the cold temperature numbs your taste buds slightly. This means you taste the flavor of these desserts slower, and savor them for longer.

Since gelato has less fat and a lower temperature, the flavors burst through much more quickly and more intensely. Gelato also has a creamier texture, despite its lower fat content, as it’s more fluid than ice cream.

Ice cream has a more crystalline texture thanks to its low storage temperatures.

If you visit the ice cream aisle at your local supermarket, you’ll find a staggering array of flavors available. These range from classics like rocky road, vanilla, and chocolate, to sweet potato and basil varieties.

Gelato is typically served in a bowl or a cone, while ice cream makers have found many creative ways to serve up their creations. These include ice cream sandwiches, ice cream on a stick, and coated ice cream smothered in chocolate or caramel.

Summing up Gelato vs Ice Cream

The first major difference when comparing gelato vs ice cream is in the ingredients, i.e. American ice cream has more egg yolks and cream than gelato does.

Both of these desserts are ideal for cooling things down on a sunny day, and they’re a delicious addition to any catered event. There’s no reason why you can’t enjoy both without choosing sides.

Do you have more questions? Our blog has the answers to a wide range of lifestyle topics. Keep browsing or bookmark our page and check back regularly for more.

How to Become a Tattoo Artist

How To Find The Best Caterer For Your Business Event

How To Cook Delicious Stone Crabs for Your Next Dinner

Before You Buy: Everything You Need to Know About Real Estate in...

Marijuana for Sleep: What You Need to Know

How to Start Cultivating Cannabis for Personal Use