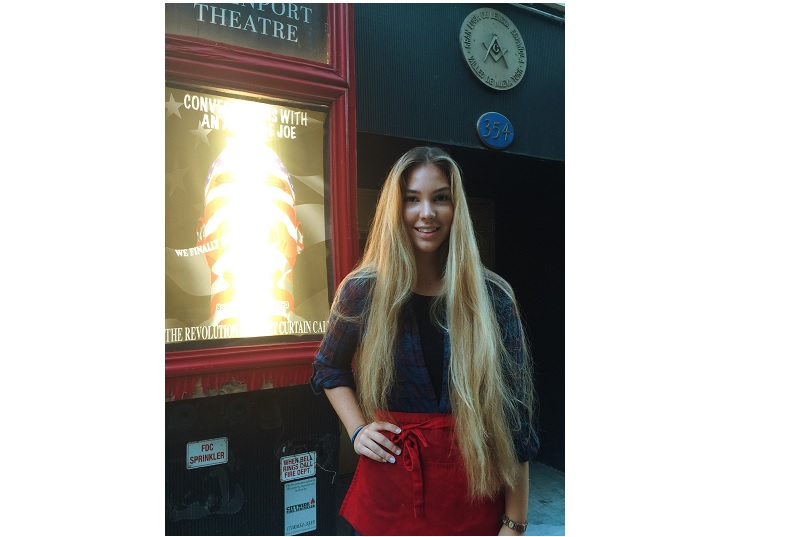 Television Star Nicole Vukov starred in the critically acclaimed Off-Broadway show Conversations with an Average Joe at the Jerry Orbach and Daventport Theater some of the most acclaimed Off-broadway theaters in New York, where she played the starring role of the student. A politically charged play that tells the story of average joes opening up the conversations about the society we live in. Ms. Vukov starring character of the student is one of not to mention the most important character in the show as it relates to a lot of the youth and the struggles that this generation faces. From student debt to being able to create a stable future for themselves. Her character definitely resonated with anyone that watched the show. As I remember Nicole’s character had the most time on stage as she had to recite some of the longest monologues of the entire show. Her commitment to the role was beyond spectacular. As the show ran about a year and half ago you may ask why I am talking about it now.

Well, this incredible show is preparing itself for another run at the end of the year and as a fan of this show I wanted to mention the importance of seeing such provocative shows. Art is about creating conversations and controversy and this is a show the books. I definitely recommend.

The show Conversations with an Average Joe was written and created by Ex. Senator Joe Carraro, who seems to have a strong opinion on the political front regarding average people not getting the opportunity to have their voices heard. This show is definitely a show has hit home and I believe it should have the opportunity to run and expand to a bigger audience. The show previously ran at the Jerry Orbach Theater, which was home of one of the longest off-Broadway shows of all time “The Fantasticks”. Having the opportunity to have a show like Conversations with an Average Joe step in after a legendary show like The Fantasticks just proves the quality and prestige of this show. I am thrilled to announce the upcoming revival of Conversation with an Average Joe and hope to see Ms. Vukov reprise her starring role of the student as her performance superb. And will keep up with her future endeavors as she is one talented actress. I reckon I will get more news coming soon about the opening of the show and cannot wait to let my readers know all about it.

How To Create Custom Patches?

Tips for Watering the Garden on hot Days

How to Be a Good Christian: 4 Basic Tips

What is the Chaldean Numerology System

Benefit Yourself with the Use of a Humidifier At Home

Incorporating Sustainability to Your Lifestyle: What to Do

What Are The Safe Ways to Store Bitcoin?

How to Choose a Rehabilitation Facility: Everything You...