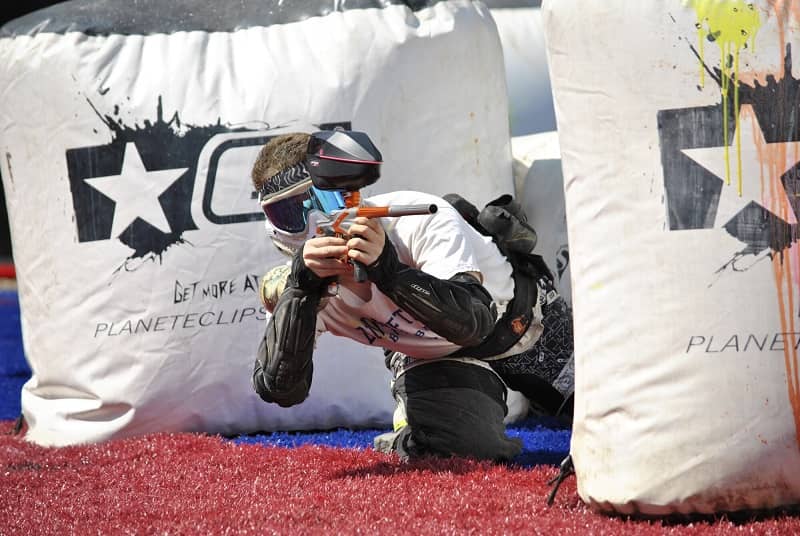 Do you have an adventurous close friend that you’ve been thinking about surprising with a fun activity?

Paintball seems like the perfect solution for a fun outing with close friends. After all, it’s a fun activity that’s a mix of strategy and excitement. But once your friend comes to you it’s time to buy the equipment you need to make the experience a success.

When looking at paintball equipment the first essential step is choosing a paintball gun that’s right for your needs. The following guide breaks down the different types of paintball guns available so you can purchase them confidently!

Paintball guns can generally be separated into three different types: mechanical, electronic, and pump. Each type of gun has its own set of pros and cons that make it more or less suitable for different styles of play. Mechanical paintball guns are the oldest and most basic type of gun. They are powered by a simple spring-loaded mechanism that fires the paintballs.

Electronic paintball guns are a more recent innovation. They use an electronic trigger system to fire the paintballs. This makes them more expensive, but also much faster and more precise.

Pump paintball guns are the third option. They are operated by a manual Pump-action that must be cocked before each shot. This makes them slower to fire, but they are more realistic and require more skill to use effectively.

Paintball guns can be broadly classified into three categories: beginner, intermediate, and advanced. Intermediate paintball guns are the perfect choice for players who have outgrown beginner guns but aren’t quite ready for an advanced gun.

These guns offer more features and increased performance, without the hefty price tag of an advanced gun. The most popular intermediate paintball gun is the Tippmann Cronus.

This gun is reliable, easy to use, and can be upgraded with various aftermarket parts. It’s a great choice for anyone looking to step up their game without breaking the bank.

Fully automatic paintball guns are the newest type of gun on the market. These guns can fire multiple shots per second and are generally considered to be the most powerful and effective type of paintball gun. However, they are also the most expensive and can be difficult to master.

Airsoft guns are replica guns that shoot plastic pellets and are often used for training or target practice.

Custom paintball guns are made to order and can include any features the customer wants. The most common type of paintball gun is the pump-action paintball gun. This type of gun is operated by a pump that is located on the top of the gun.

The pump is used to cock the gun and also to pump air into the chamber to fire the paintballs. Another type of paintball gun is the semi-automatic paintball gun.

This type of gun uses a gas-powered system to fire the paintballs. The gas is usually stored in a CO2 or compressed air tank that is attached to the gun.

Pump paintball guns are the most basic and oldest type of paintball gun. They are powered by air tanks and must be manually cocked after each shot.

Fully automatic paintball guns are powered by batteries and can fire multiple shots without having to be manually cocked.

Electronic paintball guns are powered by batteries, and their firing mechanism is controlled by a microprocessor. This makes them more expensive than mechanical guns, but also much more reliable and easier to use.

Mechanical guns, on the other hand, use a spring-loaded firing mechanism that is cocked manually. They are typically cheaper than electronic guns but can be less reliable and harder to use.

Markers are the most common type of paintball gun used in the sport. They are operated by carbon dioxide or compressed air and are semi-automatic or fully automatic.

Paintball pistols are smaller and easier to handle than markers, making them popular among new players and those who prefer a more compact gun.

Rifles are the largest and most powerful type of paintball gun and are often used by experienced players who are looking for an advantage on the field. Snipers typically use rifles because of their long range and accuracy.

Paintball guns come in a variety of shapes and sizes, each with its own set of benefits and drawbacks. To keep your paintball gun in top condition, it is important to understand the different types of guns and how to properly maintain each one.

To properly maintain your paintball gun, you will need to clean it regularly and inspect it for any damage or wear. You should also lubricate the moving parts to keep them operating smoothly. If you take care of your gun, it will serve you well for many games to come.

Want to learn more about paintball guns? Check back with our blog before your next paintball game.

How to Write on a PDF

The Best and Most Profitable Sports to Bet On

Samsung Gaming Hub Is Set To Arrive In 2022: Here’s What You Need To Know

How Students Can Make Use of Fund Biology Answers Help Judiciously?

The Different Types of Construction Equipment That Exists...