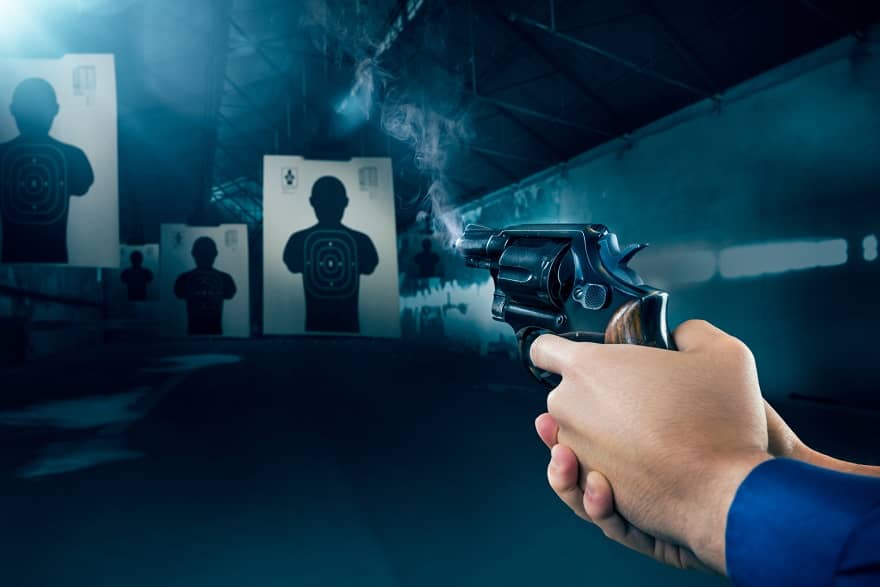 There’s more to becoming a great shooter than pure marksmanship. For many shooters, it’s important to know a wide range of comfortable shooting positions.

For instance, you may need to shoot quickly from an improvised firing position. If you only practice shooting while standing, you may not know how to hit your target under different conditions.

In the prone position, the shooter lies on his or her stomach with the elbows supported. The forearms and hands are extended in line with the barrel of the gun, and the rifle is pointed straight ahead. The feet are usually shoulder-width apart, and the legs are straight.

This is one of the shooting stances that is often used when shooting at long range when precision is of the utmost importance. It can be difficult to hold the rifle steady in the prone position for an extended period of time. But, with either practice or accessories like a rifle bipod, it is possible.

The kneeling shooting position is a shooting technique that is commonly used in rifle shooting. It is a position where the shooter kneels down on one knee with the other leg forward, and the rifle is rested on the forward leg.

This is one of the rifle shooting positions that allows for greater stability and accuracy when shooting. This is because it is easier to keep the rifle steady when kneeling.

The rifle is then rested on the shooting arm, and the shooter looks through the sights to aim. The sitting firing position is used when the shooter is either shooting from a distance or when they need to be more accurate.

The standing shooting position is also sometimes referred to as the off-hand position, as the shooter will typically be holding the gun in their non-dominant hand.

This position is a great option for those who are looking for a stable and sturdy platform from which to shoot. It is also a position that can be used when shooting from a variety of angles and directions.

Shooting Positions To Help Get You on Target

In order to shoot effectively, it is important to start with basic shooting positions. There are four main positions: standing, kneeling, sitting, and prone. These are the key positions to know and learn about if you want to start shooting.

Each one has its own benefits and drawbacks, so it is important to experiment to find which one works best for you. With practice, you will be able to hit your target consistently from any position.

For more tips and guides like these, be sure to visit our blog today!

5 Common Email Management Errors and How to Avoid Them

The Main Types of Guns: A Buyer’s Guide

A Complete Guide to the Different Types of Vape Pens

FORMING AN LLC IN NEVADA/ LEARN HOW TO FILE YOURSELF AND SAVE...

7 Signs You May Have a Drinking Problem

How To Choose The Right Projector For Your...